Wishing one and all an illuminated Christmas filled with the brightest love.

On Math, Variables And Constants

He sidled up from behind and peered over my shoulder as I busily scribbled at my desk.

“You are doing Math?”

His grin quickly changed into a look of seriousness when I turned around with a scrutiny of evaluation. He let out a cough at my gaze of suspicion before continuing.

It was starting to feel like we were pulling neverending puns on each other.

“You know how there are variables in Math equations, represented by letters like ‘y’ and ‘x’ and et cetera?”

Was it going to be a revision of calculus? He let out a chortle, as if reading my thoughts at that moment.

“Now, you would say these variables are affected by each other, won’t you? In whatever way they are related.“

“Now, consider the constant in a relation, sometimes abbreviated endearingly as ‘c’. It is an important part of it, but yet it remains unchanged, regardless what happens to either or both variables.”

I was getting more and more perplexed. He must have noticed, and thus let out a reassuring grin before continuing.

“So, assuming both the variable and the constant in a relationship could take on positive values only. The variable could still result in a negative result, but the constant always positively amplifies the outcome. That right?”

He continued, looking at me, still smiling.

He gave me a bright grin, then sauntered away, whistling.

I think I know my answer.

Wishing one and all a Christmas filled with warmth and inspiration. 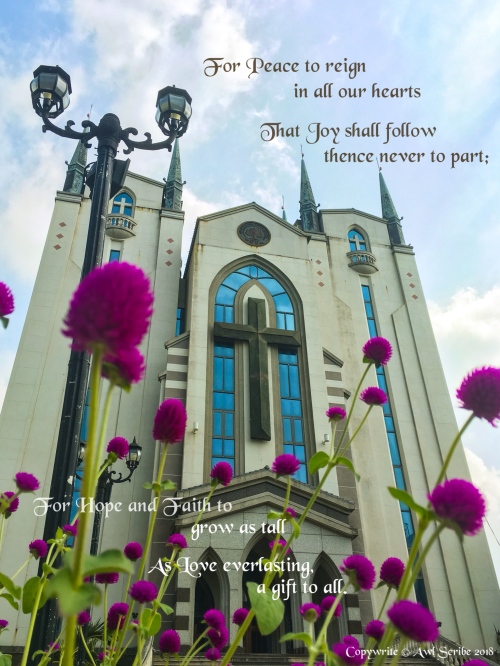 This has been on my mind for a while now, since I saw the tree outside my apartment undergo some major pruning. I had felt sad, but I guess there’s more to rejoice.

“What’s going on?” I cried, rushing out into the garden.

He had a ladder against a tree and was at the topmost rung, perched and holding a saw, gazing up into the leafy arms. On the ground lay several piles of leaf-sprouting branches.

He saw me standing arms akimbo below and waved down at me, yelling, “I’m pruning the trees!”

“But why? They looked so beautiful with their crowns of green,” I pouted. “Now they look all ugly and bare!” I looked at the stumps of nothing against the bright blue skies and felt upset all over again.

“I feel like the trees have wasted all their efforts growing themselves out.”

“Yeah I know; they were glorious weren’t they?”

He came down from the ladder and stood beside me, looking up at the stumps too. “But pruning has way more benefits that outweigh this temporary ugliness.”

He glanced over at me sulking and laughed.

“Well, pruning helps to remove deadwood that hampers trees from growing to their best potential, and also helps to shape them and redirect their growth.”

He leaned the saw gently against the tree, then continued, gazing kindly at me.

“When they grow better, and in the right directions, they become healthier. At the same time, risks from falling branches are reduced while yield or quality of flowers and fruits are increased.”

“Yeah… I suppose you are right,” I replied grudgingly.

“That’s what you can look forward to. But it will take some time.” He patted me on the shoulder and winked. “But I assure you, it will be a magnificent sight to behold.”

And so I wait, for that magnificence to unfold.

She asked me, with a
Chirpy smile if I was going to
Get the latest mobile phone, not
Unlike the rest of them enquiring of
Other material goals and milestones
That signify a successful life.

Don’t get me wrong, there’s
Nothing wrong with seeking still
Greater gratifications, for
Life is already such a tedious chore
That surely a little indulgence –
Perhaps two – would lend meaning.

I tarried to explain that I already
Own the greatest treasure
One could ever have –
A soul unshackled by carrots of
The human race, living by its calling
Past the end of human days

So I just smiled and replied that
I have not that need, and pray one
Day, that their burdens be light
And their yoke easy.

Lead me to the
Depths of my soul, then
Undress it by layers till my
Purest form shows;

Protect it with the
Fortress of your might, then
Stay with me till the promise of
Eternal light.

I flopped into the couch and sighed loudly. He looked up, amused. I sighed again and pouted.

“It’s so difficult being real.”

“There’s so much hatred and self-centeredness out there. There’s just no point. No one cares anymore.”

He closed the book.

“What do you propose to do then?”

“Oh I don’t know, maybe I’ll just not go out that much anymore. It’s all so tiring.”

“Listen. What do you hear right now, outside the window?”

If there were such a thing as squinting my ears, that was what I did right then.

“I don’t hear anything.”

It was then that I heard it. The quiet chirping of a bird. But it was so soft that I would not have noticed it.

“That’s right. Now, listen again and tell me what you hear.”

This time, I was getting the hang of this little exercise.

The birds were sounding pretty lovely actually, sort of like they were having an animated conversation.

“You see, the first little bird was just chirping the way he knows how to. The way he should. That is his nature.”

“And at first, he was just chirping by himself. But then, you heard another one responding to him. And there was a third. And it all started sounding pretty amazing. It became a beautiful three-voice song.”

He looked at me, smiling.

“But here’s the thing. No one could hear him at first. And even when he could be heard, not everyone likes his song.”

“Still, he continued singing that melody, not changing it or replicating another bird’s tune, because that’s what he was made to sing.”

“He’s just being himself. He’s being real.”

“And look what happened: other birds came. They understood what he was singing and responded to him, and now they’re having a mighty fine session.”

“I think I know what you’re saying…”

He gave me a wink before reopening the book.